Back on solid terra firma….

An early disembarkation with the bike craned flawlessly off of the boat and on to the pier where the bus waited to take us to our hotel made for a great start to what should have been a nice relaxing ‘repack’ and get ready for riding in Norway kind of day, or so I had hoped.

Standing on the pier we hugged our new friends a wonderful farewell whom we hope to see again and wished the crew the crew and expedition team a wonderful following voyage (which was due to leave six hours after our arrival). I jumped on the bike and rode it towards the port security for screening and passport check but there was a rail road track in the way – not usually a problem for a bike, more so when the track is only an inch or two above the ground but between a little excessive eating, possible weight gain and the fact that it was a low frame, low seat 700GS, the rail road track proved to be a little more than the bike wanted to go over. A thud from underneath the bike and a sudden gush of engine oil all over the place made my heart sink to me toes! 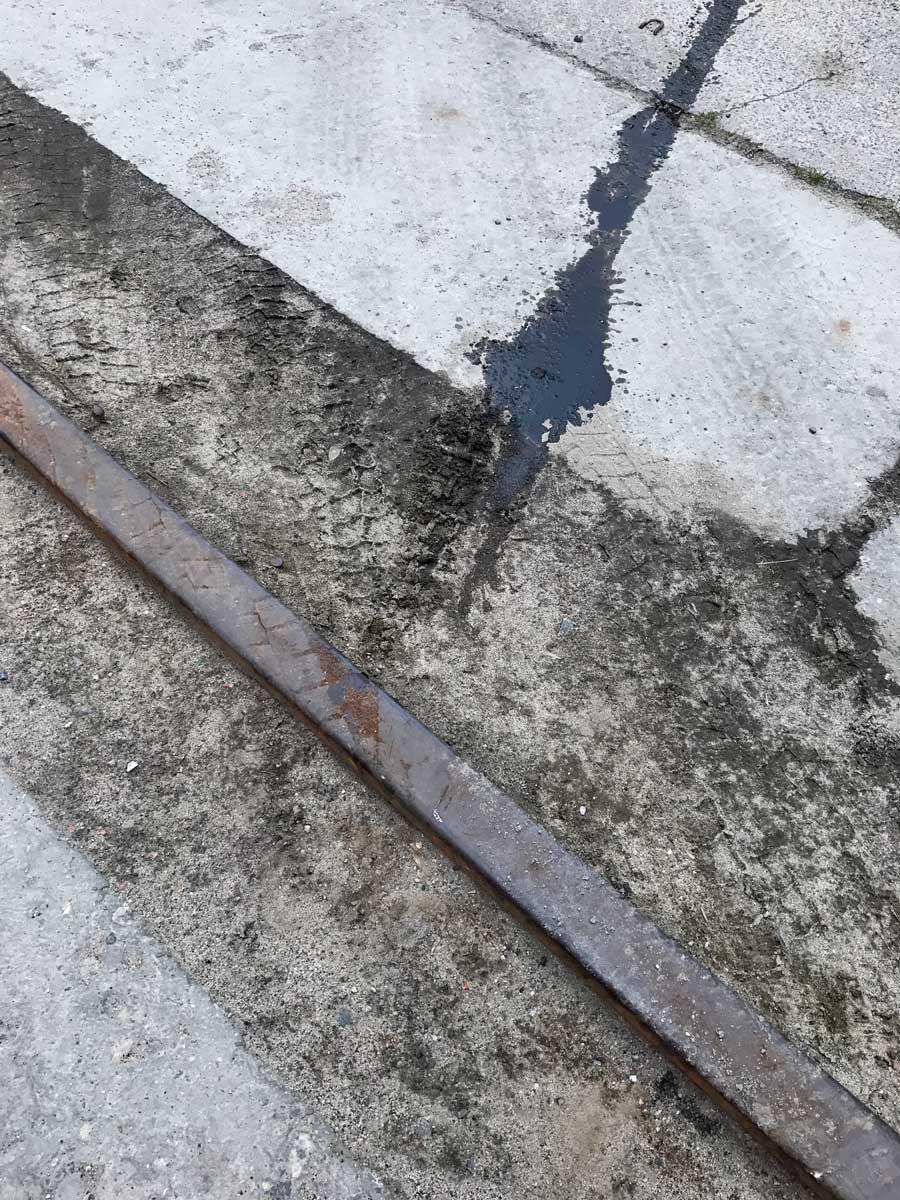 During the sailing to the North Pole one of the riders stumbled whilst playing volleyball and hurt his wrist, possibly even broken. The expedition team arranged a private transfer to meet him at the port and take him straight to the hospital while I sorted out the bike and the rest of our riders were taken to the hotel in a bus. Sadly the hospital confirmed the news that his arm was broken and that he would be best to fly home the U.S. and have it looked at with the possibility of an operation. As if that was not bad enough…He gets back to the hotel and calls me (currently out in the middle of nowhere looking for a welder) to let me know that his luggage had not been taken off of the bus with the other riders luggage. A few phone calls later and thankfully his luggage was promptly delivered back to the hotel.

The rail road track had hit the underside of the engine cover and knocked a hole right in to the engine allowing all of the oil to spray out in seconds. Of course this had to happen in front of a crowd, the rider that was to continue riding the bike for the rest of the tour, in front of the entire ship and expedition crew and before I had the chance to get the bike and myself through security. To top it off, being a low frame and suspension setup, grabbing a regular spare 700GS was not an option.

It is absolutely amazing the things that one can get done by people in the most bizarre places. Long story short, we were taken to a large truck repair shop that looked absolutely terrible but in the back corner in a very dark room there was a man with an alloy welding kit that had the tools and a great reputation. We cleaned up the engine from all remaining oil, placed the bike on its side and let him weld away. 20 minutes and $30 later (I was happy to pay him 10 times that amount – during that time that he was welding we had phone every BMW dealer within a 3 country radius and none of them had stock to the required part) We rolled the bike out, filled it with oil and it leaked…….. We did have a plan B and a plan C but I really wanted to get this bike back to the rider and running perfectly for the tour. 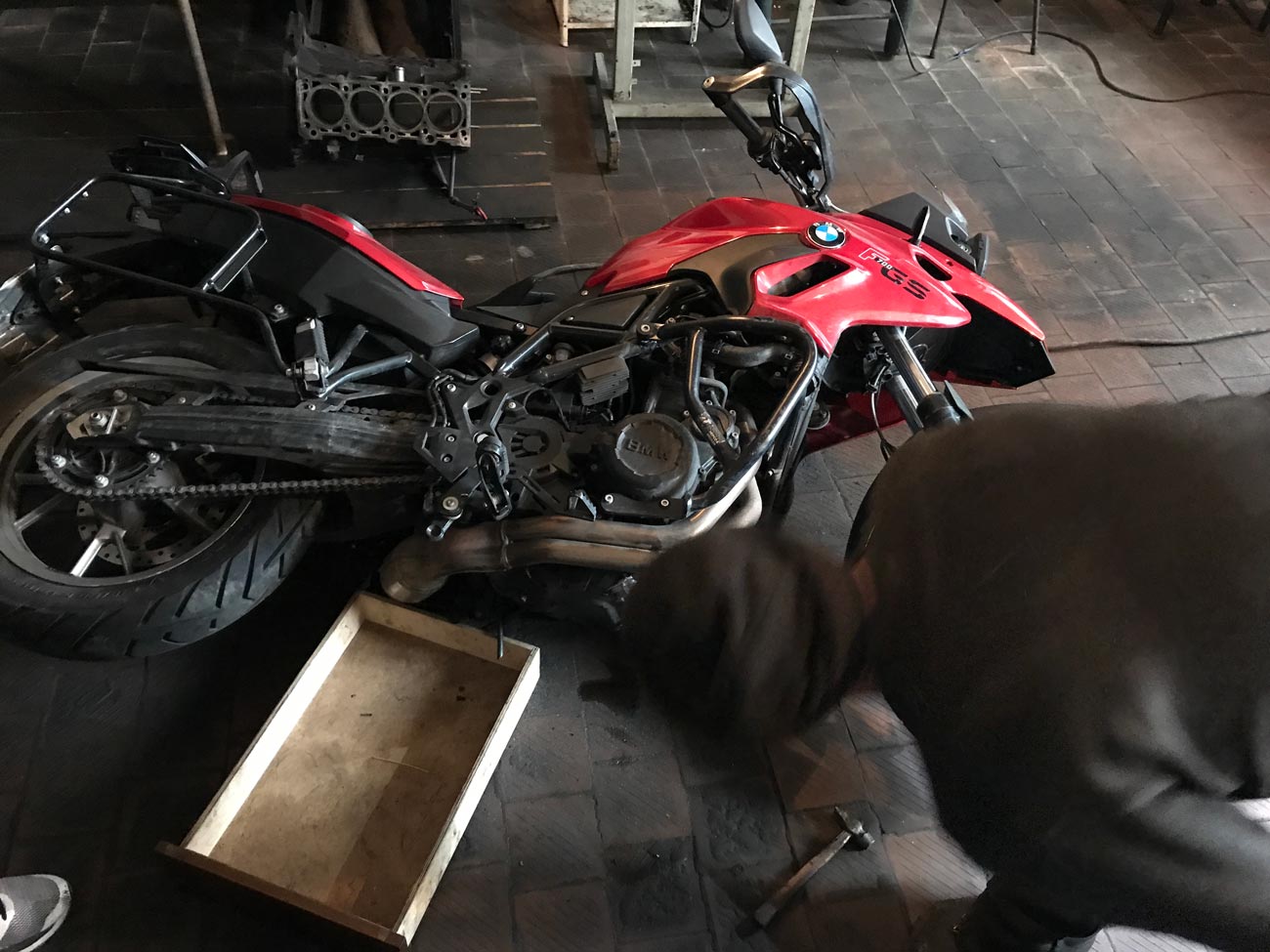 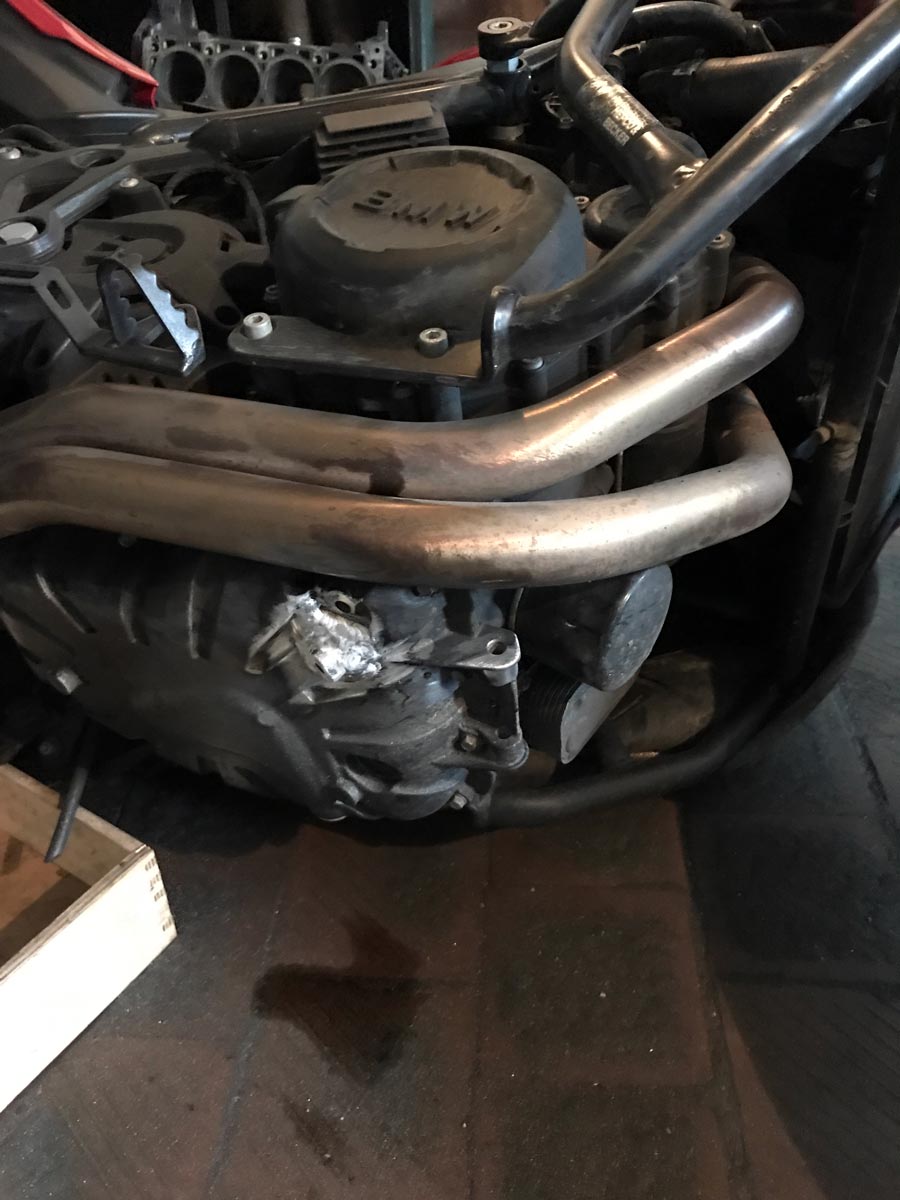 Back in to the workshop it went, over on its side, another 20 minutes of welding later and we were ready to give it another try. As many will know, there are huge risks welding magnesium or alloy or a combination thereof, more so when it is on the motorcycle and covered in oil. This time we filled it up and no leaks. Warmed the bike up, no leaks. Took it for a really long ride to make sure that the warm engine, expansion in the metal and thinner oil did not effect the repair, no leak! We had been at this for 10 hours and had 20 minutes to get ready for dinner with the group! What a day. We ended it with a really nice dinner close to the hotel and a glass (or two..) of great wine!

Murmansk is an interesting place, certainly not a holiday destination nor is it particularly pretty, in fact it is far from pretty. It is gloomy, soviet style and it feels depressing. Great place logistically for the tour and our hotel was really nice, but that is about all. Leaving in the morning it was drizzly and grey but we got out of the city hassle free and were excited to be back on the bikes. 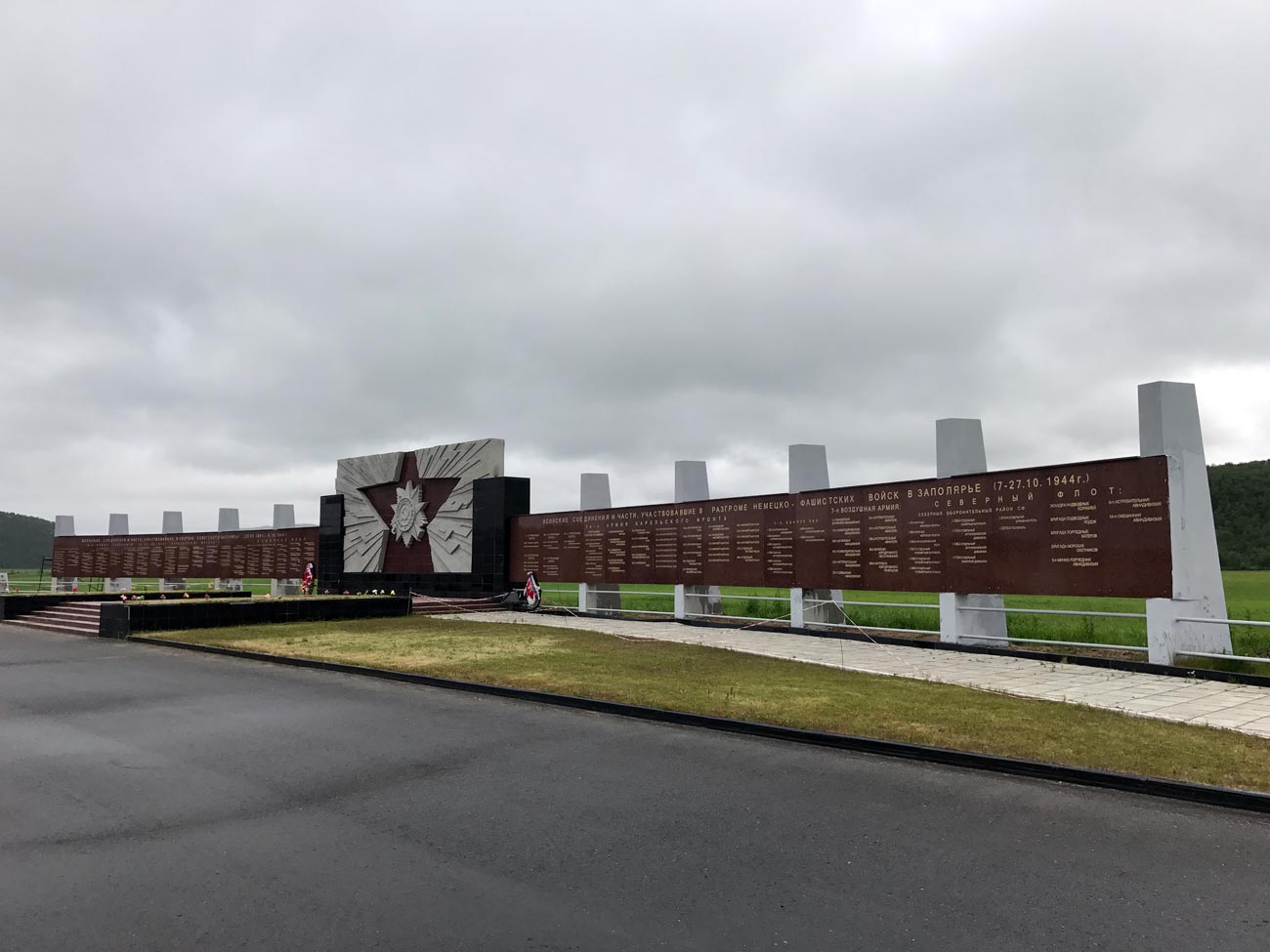 A few miles out of town and it felt as though we had just ridden in to a different world. A world with rolling green hills, small lakes, beautiful newly sealed road and stunning views. A combination of Scotland and New Zealand but you we knew that we were heading to Norway. 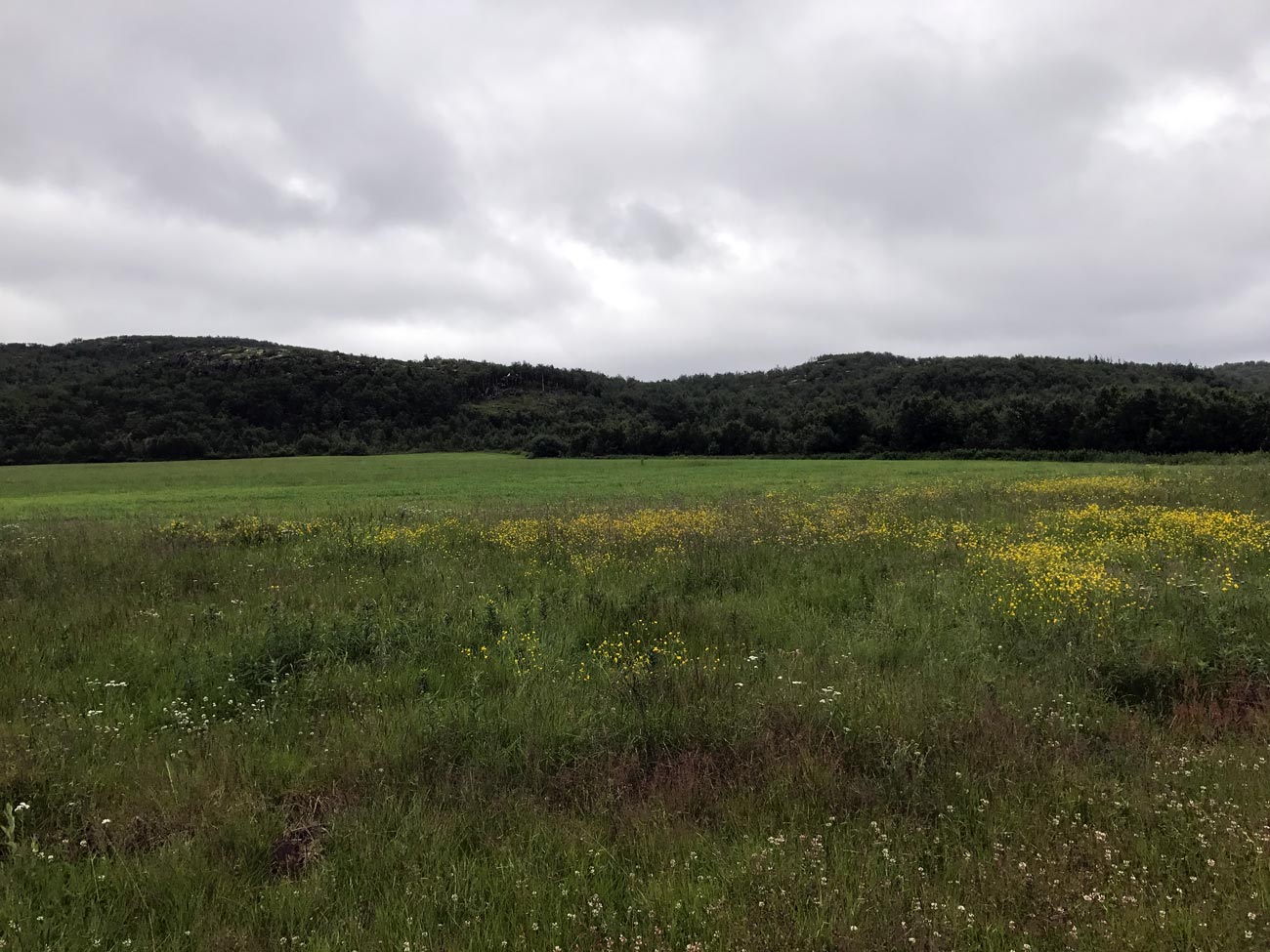 We passed many army and military towns, the exact reason as to why there were so many military bases one after the other I am not sure about but I have never seen so many military bases, trucks, soldiers and tanks in my entire life – of course I did not risk taking pictures even though we rode through a town called ‘Sputnik’! 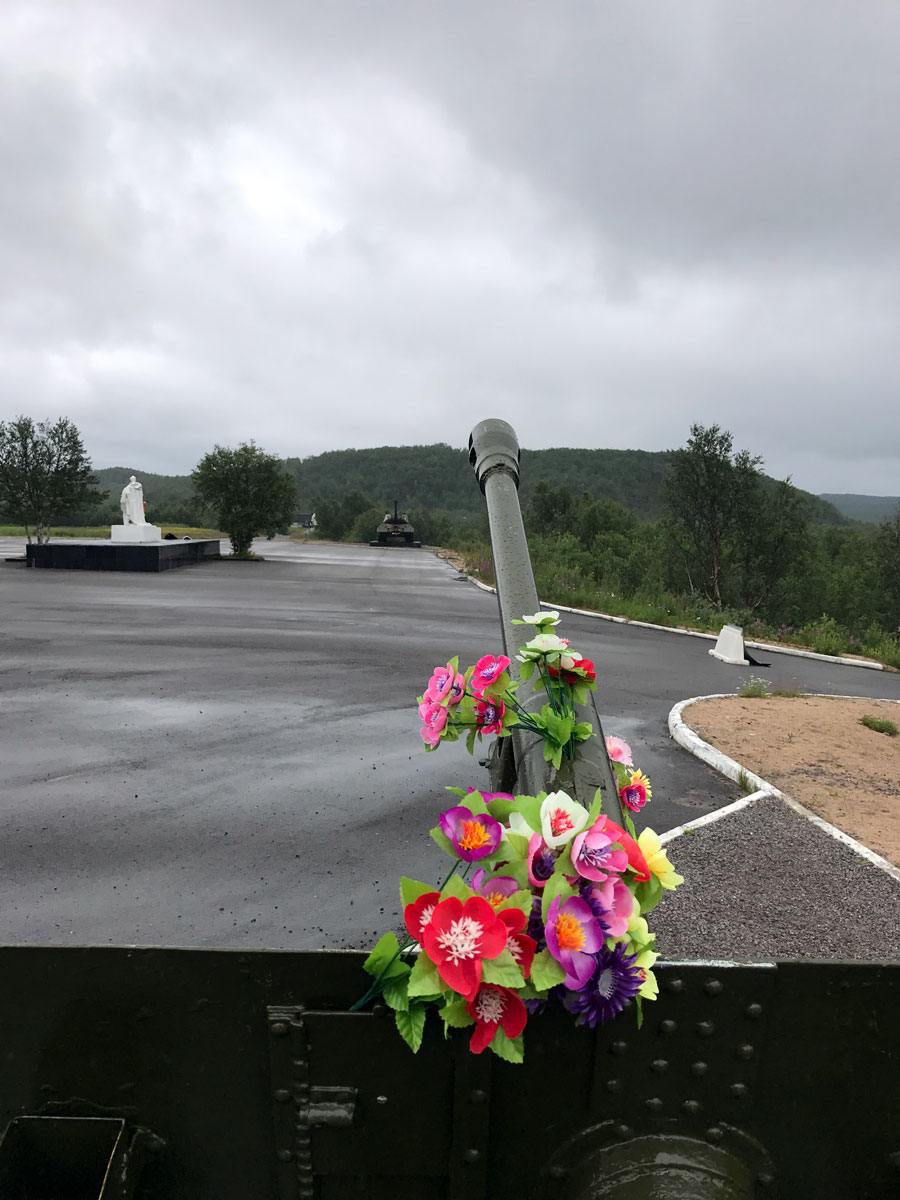 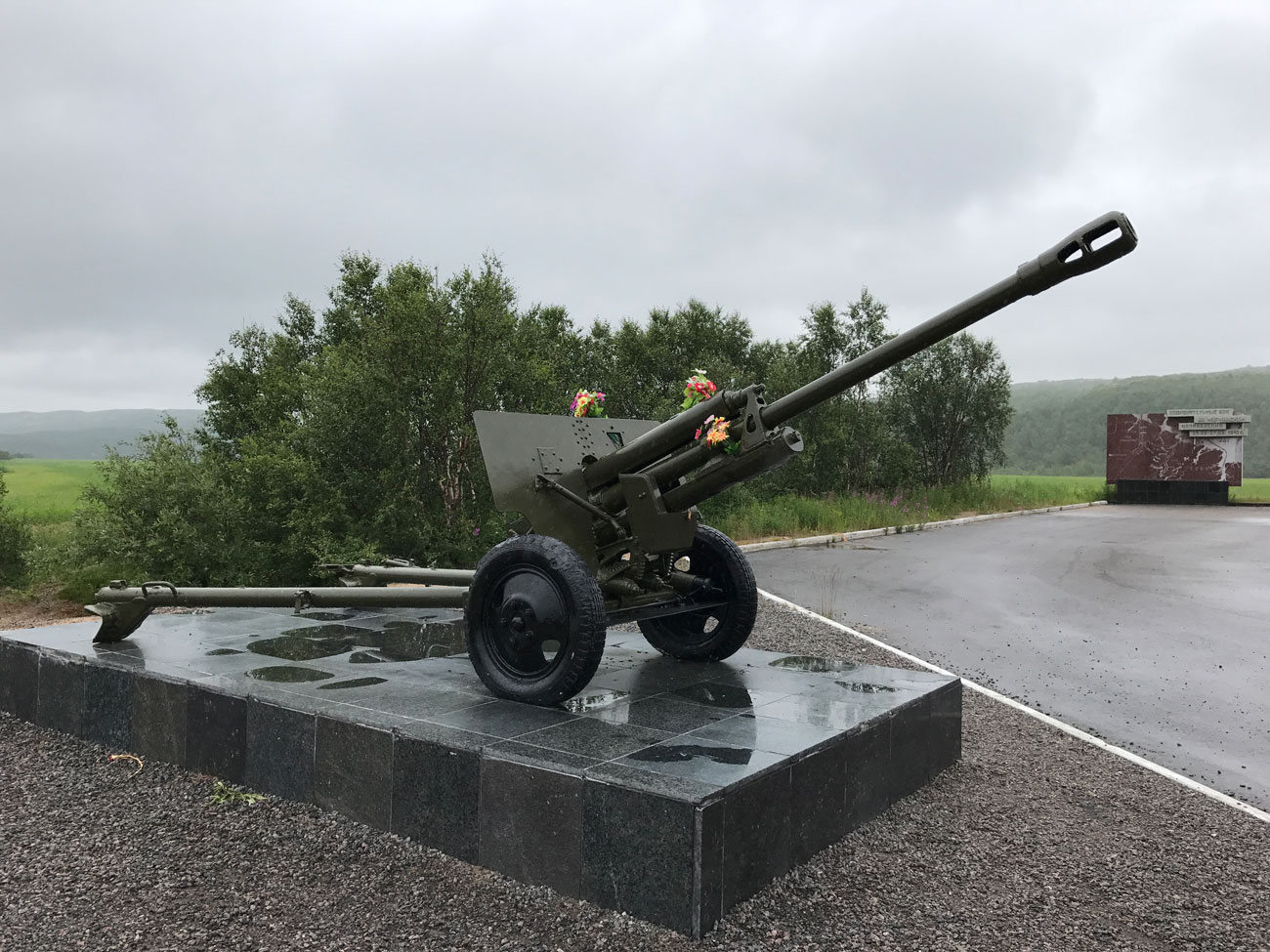 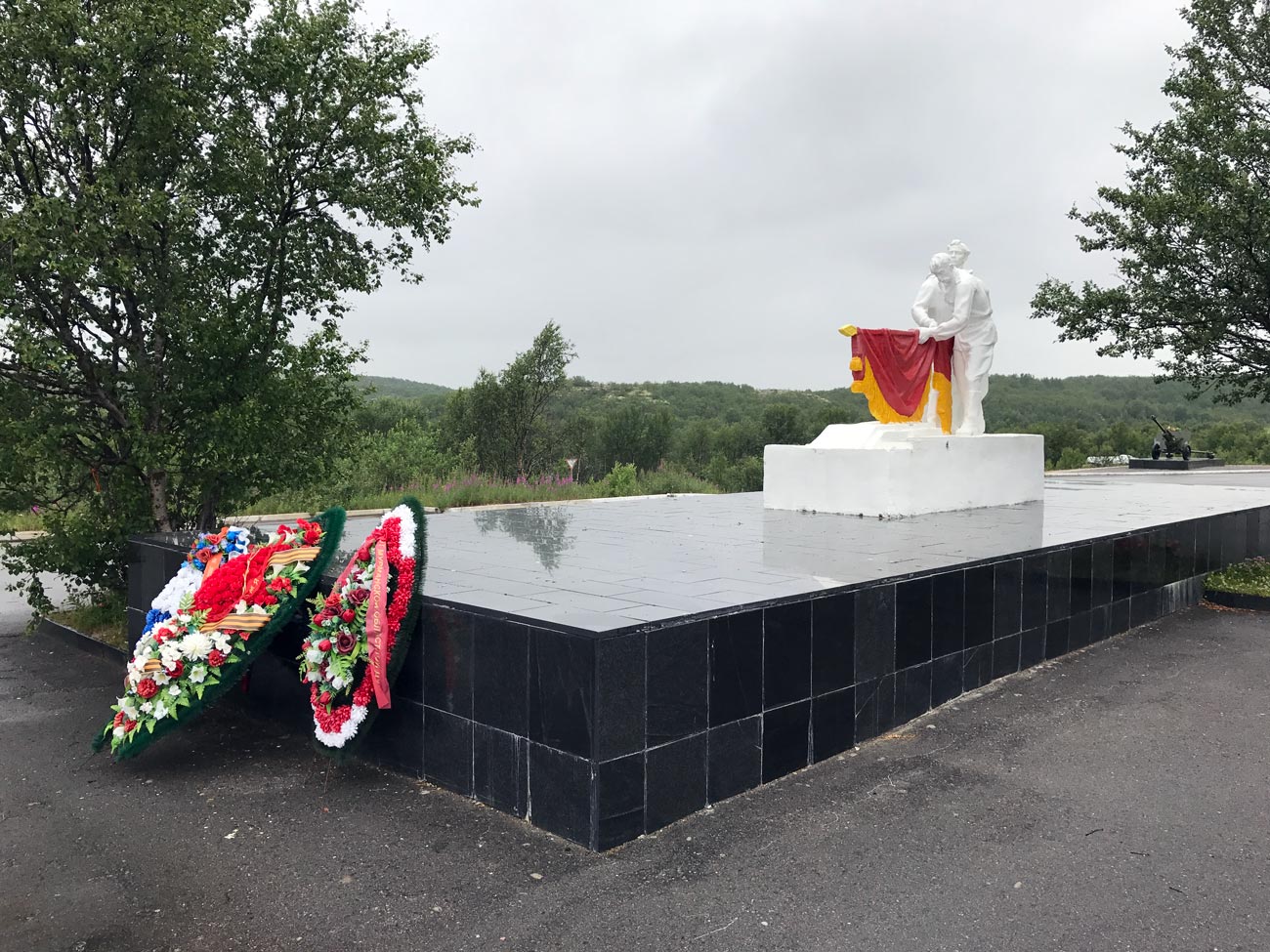 A quick coffee stop at a small cafe in Titovka before heading to the border. The border crossing was really quick and easy and before we knew it, we were in beautiful Norway. An afternoon run along the coast followed by a great dinner was the perfect way to end the day and get ready for the next leg of our tour as we make our way through beautiful Norway! 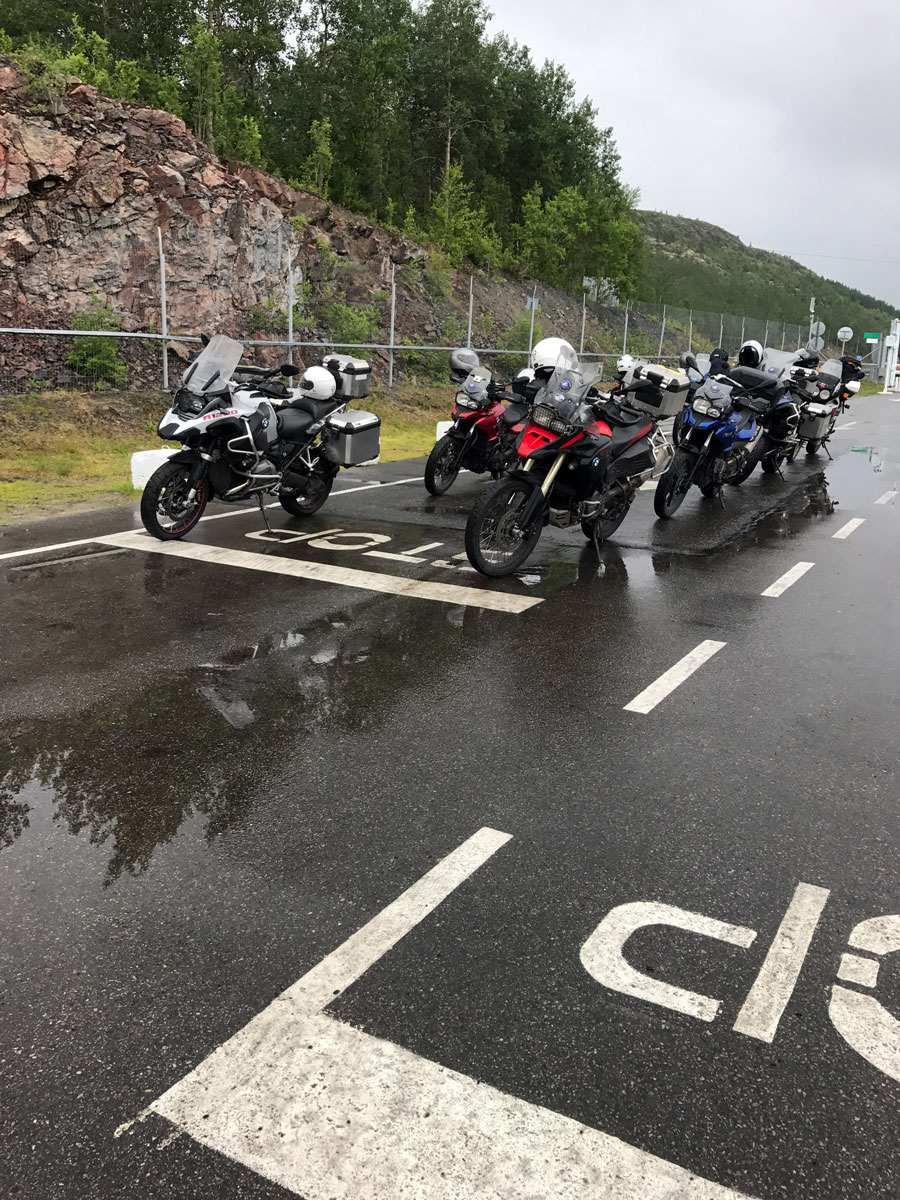