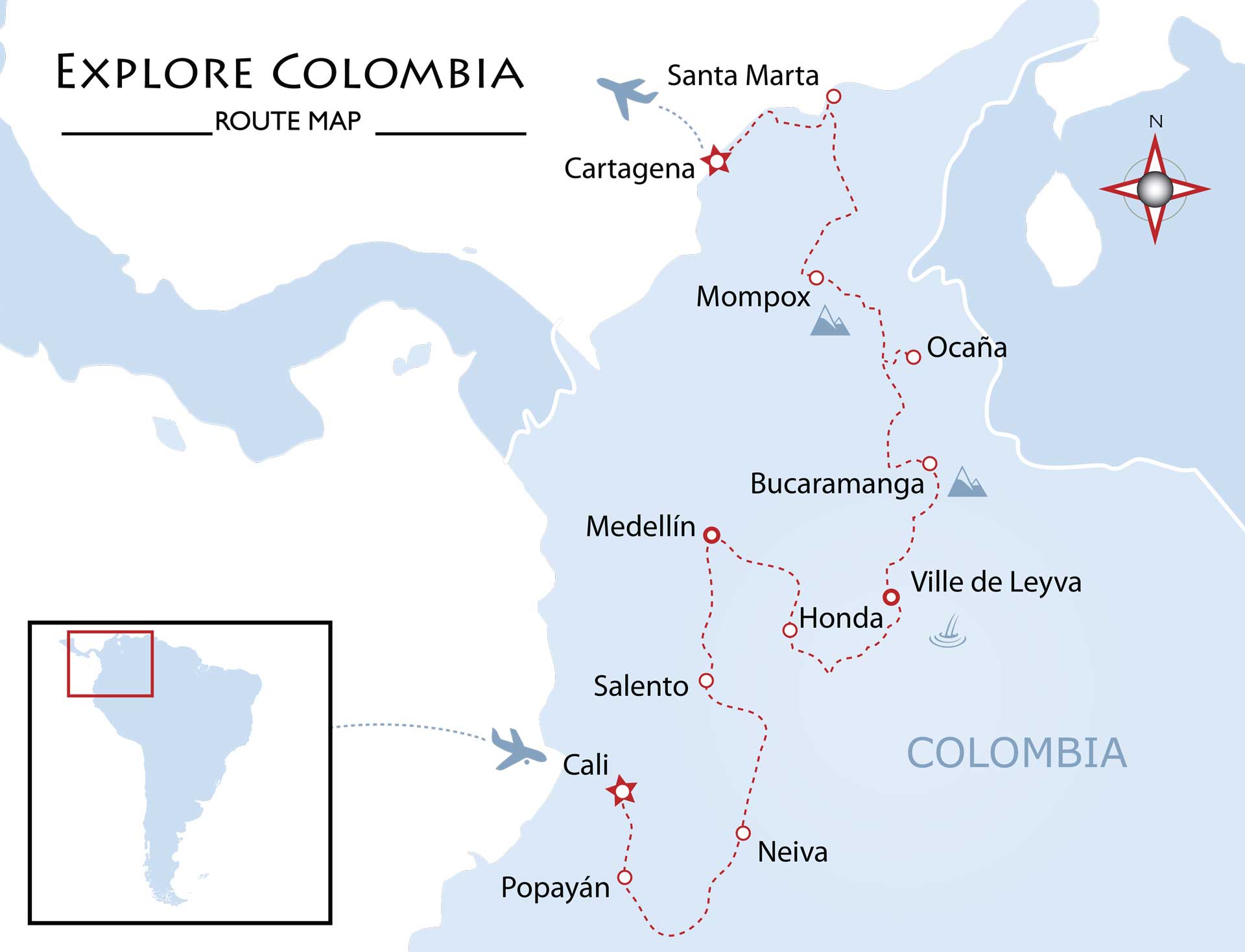 Our 15-day Explore Colombia tour begins in the Salsa Capital, Cali, and ends in the beautiful and historic city of Cartagena. This Adventure features great riding on many narrow and winding mountain roads as well as along the beautiful Caribbean coastline as we do an in-depth exploration of Colombia. Along the way, we will be enjoying premium accommodations and outstanding local cuisine in fine restaurants.

AT A GLANCE YOUR EXPLORE COLOMBIA ADVENTURE 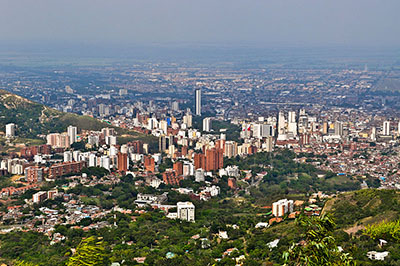 Beinvenido a Colombia! We will arrange for your transport from the airport to our hotel. Those arriving early can enjoy some of the highlights of Cali, a city of 2.4 million that is also known as the Salsa Capital due to the city’s love of that music genre. You might want to visit Cali’s oldest quarter with its neoclassical San Pedro Cathedral or the nearby 18th and 19th century San Francisco Religious Complex.

Later in the afternoon, we will meet for the motorcycle handover and a brief kickoff meeting. This will be followed by dinner in an upscale restaurant where we’ll get our first taste of Colombian cuisine. 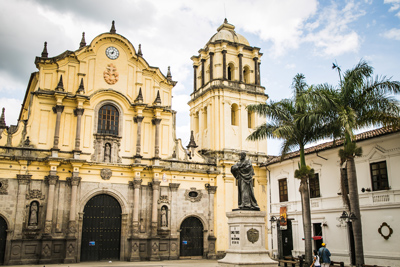 Our first riding day will be relatively easy as we head south, with the Cordillera Central mountain range as our backdrop. The Cordillera Central is the highest of the 3 branches of the Colombian Andes with volcanoes extending up to 19,000 feet. Our destination, Popayán, is the capital of the Cauca Department with a population of 440,000. Our early arrival gives us time to walk around one of the most picturesque cities in South America, known for its whitewashed colonial buildings as well as its many architecturally-impressive churches and cathedrals. Popayán is also known for its elaborate Holy Week ceremonies, the second largest in the world after Seville, Spain. Popayán has been declared a “City of Gastronomy“ by UNESCO because the traditional methods of food preparation have been preserved over the centuries through oral tradition. 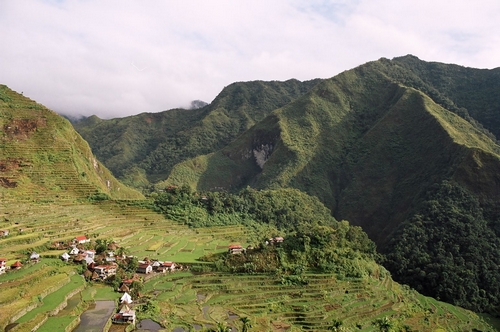 Today we get into serious riding and have two options as we cross the Cordillera Central on high pass roads. The direct route is 175 miles, of which 60 is unpaved. The longer option is via San Agustín with only short unpaved sections. This second route allows us to make an optional 20-mile detour to the San Agustín Archeological Park which contains the largest collection of religious monuments and megalithic sculptures in Latin America and is also the world’s largest necropolis.

From there we continue north following the course of the Magdalena River which, at 1000 miles long, is Colombia’s principal river. Our destination, Neiva, is considered one of the most important cities in southern Colombia because of its geographical location. It is known as the Bambuco capital, a traditional music genre similar to the European Waltz. 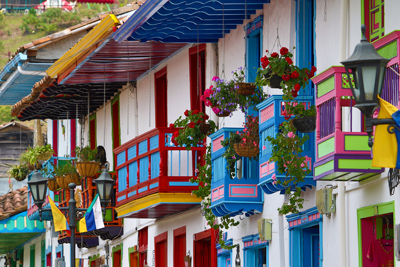 Heading north along the Magdalena River, our first stop will be at a tropical dry forest, the Desierto de Tatcoa, the second largest dry area in Colombia. We will have lunch at Colombia’s rice capital, El Espinal, where tamales and suckling pig are the local dishes. After lunch we will head for Colombia’s coffee region through the natural cloud forest of Valle de Cocora, a subtropical highland that is part of the Los Nevados National Park. This area is home to the wax palm, Colombia’s national tree and the tallest palm in the world. Our destination is the small town of Salento, known for its traditional colonial architecture and impressive views of the Cocora valley. 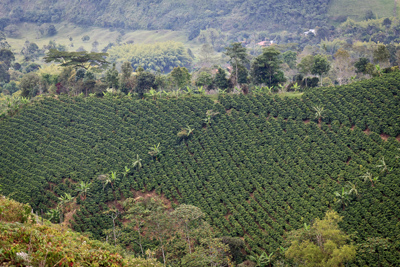 In the morning, before we depart, we will have the opportunity to visit a coffee plantation to gain a deeper understanding of what this region is famous for. We then continue north following the Cauca River until we reach La Pintada where we will begin a spectacular ride climbing to our destination: Medellín! With a population of 2.5 million, Medellín is Colombia’s second largest city. Once known as “the most dangerous city in the world”, it today shares the top ranking with Santiago de Chile as “the best city to live in” in South America. Our five-star hotel is the perfect base from which to explore this fascinating place. 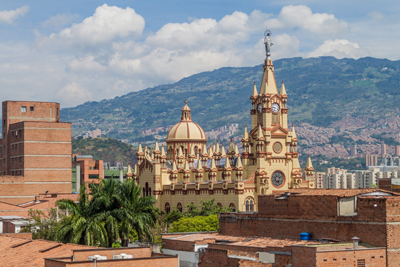 Today you can choose to enjoy a day of relaxation in our luxury hotel or select from the many activities available for exploring Medellín in more depth: take a tour of Medellín’s many museums, go on an art tour focusing on Colombia’s famous artists, learn about the life and death of Pablo Escobar or take a city tour that includes a metro cable gondola ride. These are just a few of the numerous possibilities. 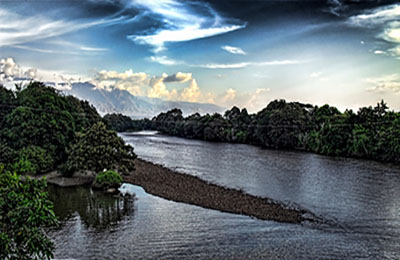 Leaving Medellín, we climb to 7000 feet before we begin our descent on a beautiful and twisty road to the Magdalena River Valley. A detour will be required if we want to visit the Rock of Guatapé, a massive stone rising over 650 feet out of the flat ground, which was once worshipped by the Tahamies Indians. It can be climbed using a masonry staircase wedged into a natural crack. The reward is a beautiful view of the surrounding valley.

After our detour, we will enjoy a twisty ride along the Magdalena River to our destination, Honda, the “City of Bridges”. 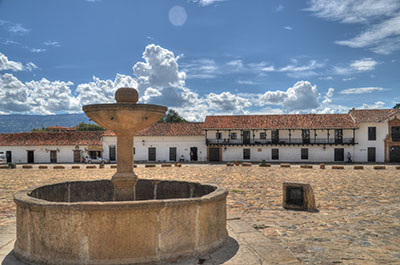 As we circumnavigate Bogotá, Colombia’s capital, we will have the option to take a side trip to Facatativa to visit Piedras de Tunja Archeological Park where there are rocks covered by pictographs from an ancient culture. North of Bogotá we will have a chance to visit Zipaquirá Salt Cathedral, a church built within the tunnels of an old salt mine 650 feet underground. Our destination, Villa de Leyva, is one of the few towns in Colombia to have preserved much of its original colonial style and architecture – the streets and its large central plaza are still paved with cobblestones and many of its buildings date from the sixteenth century. 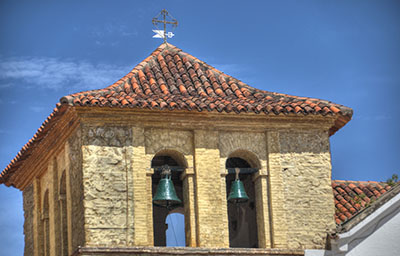 On this free day, you can choose to relax at the hotel or do some sightseeing around the city. You might want to visit the Terracotta House, the La Periquera waterfalls, take a 4×4 ride into the desert or visit the dinosaur fossil museum. 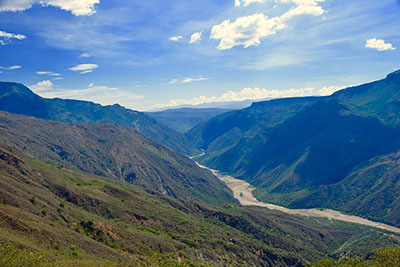 A beautiful ride along the western slopes of the Cordillera Oriental leads us to San Gil, a favorite vacation spot of the Colombians. Here we can visit the Parque El Gallineral with its ethereal foliage reminiscent of a scene from Tolkien’s Middle Earth. After lunch in the 300- year-old town square, we can take an optional 25 mile loop along a twisty paved road to “the prettiest town in Colombia”: Barichara. An old Spanish colonial town, Barichara has impressive cobblestone streets and whitewashed buildings with red tile roofs that look almost as new as when they were created 300 years ago. Our final 60 miles will be a rider’s paradise as we wind our way along the steep walls of the of the spectacular Chicamocha Canyon! Our destination Bucaramanga, “the City of Parks”, is well worth a walk before dinner. 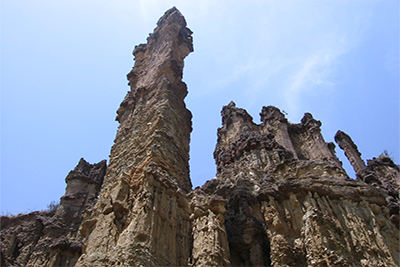 As we depart Bucaramanga, our ride will be filled by exciting switchbacks followed by a more relaxing ride along the Magdalena River valley. We will stop at Los Estoraques to view a unique landscape; a stunning collection of rock formations formed by thousands of years of erosion. 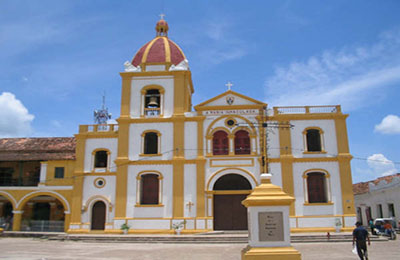 Our ride today will be along the Magdalena River valley. Our destination, Mompox, is in the center of a large delta formed by the Magdalena and the Cauca Rivers. The historic center of Mompox was declared a World Heritage Site due to its blending of Spanish and Indian colonial architectural styles. 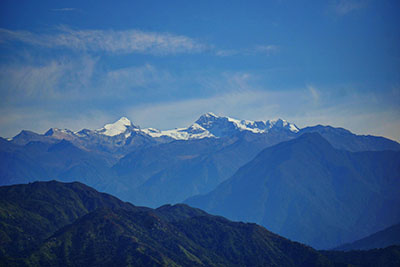 Today we head toward the Caribbean Sea riding along the Sierra Nevada de Santa Marta,one of the world’s highest coastal ranges with its 19,000 foot peaks. Our destination, Santa Marta, is spectacularly situated between the Caribbean Sea and the Sierra Nevada mountain range. Fringed by beautiful beaches, it was the first Spanish settlement in Colombia and is the second oldest city in South America. An early arrival will allow us to sample some of the highlights of this beautiful city – take a stroll on the Bastidas boardwalk, visit the Rodadero Aquarium, or enjoy the view from Punta Betin. 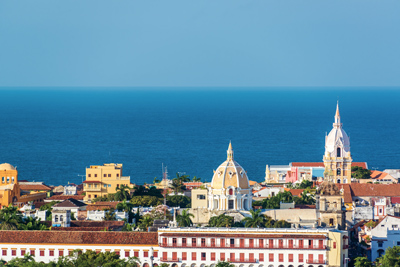 A ride along the Caribbean coast is a great way to spend our last riding day! We will stop at El Totumo, the smallest volcano in the country, which is used as a healing mud bath by visitors. After soaking in the warm dense mud, tourists use the nearby lagoon to wash off the mud.

Our last night will be spent in Cartagena, one of Colombia’s major tourist destinations. Cartagena could be said to be an open-air museum with its many colonial treasures. The historic city center, a UNESCO World Heritage Site, is surrounded by an almost 7-mile long imposing stone wall which was originally build by the Spaniards to defend against pirate attacks. We should have time to explore some of the fascinating history of this area before our final dinner together. 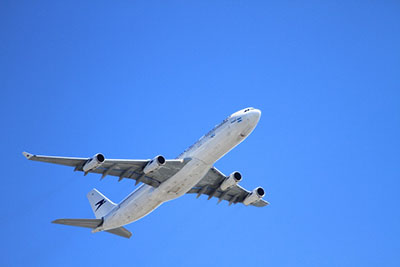 After a leisurely breakfast, we will arrange transport to the airport for your flight home.

This trip is intended for experienced riders.

Please contact us about low frame and/or low seat options for our bikes.

We are happy to book any of our motorcycle tour as a private tour. For most tours, we require a minimum of 8 bikes, or 12 participants (riders plus co-riders). We can provide a private motorcycle tour for smaller groups, but a surcharge may apply. We can also customize any of our regular tours for a private group.