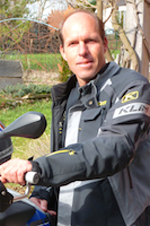 Claus Lazik is a partner with Ayres Adventures Limited. He was born and raised in Kaufbeuren, southern Bavaria, Germany.

After school and military service he studied Physical Geography at the University of Munich and worked in geological and geophysical offices and in the Bavarian Institute for Topographical Maps.

Nearly 20 years ago, Claus decided to change to a profession that would allow him to focus on his interests of motorcycling, languages, and travel. He became a tour leader with an Austrian-based motorcycle tour company and by now rode a motorcycle on all 7 continents (incl. Antarctica). He has led motorcycle tours in most European countries, as well as Morocco, Southern Africa, Dubai, Oman, China, Japan and South America. He has also traveled privately by motorcycle in North and South America, Australia, New Zealand and Vietnam.

Claus is fluent in German, English, Spanish and French and is addicted to exploring and showing the many different facets of our planet by two wheels: from the Alps and Pyrenees with their countless passes to the magic of Morocco and Southern Africa, from the colors of Spain and South America to the overwhelming beauty of Norway and Iceland.

When not traveling as a Tour Director with Ayres Adventures, Claus lives with his family in the little village of Mauerstetten, about an hour’s drive from Munich. 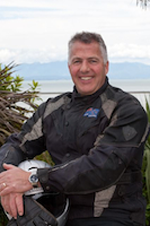 Chris has been a member of the Diplomatic Protection Squad and was a bodyguard to many visiting heads of state and Royalty. He is also an Armed Offenders Squad Negotiator, responsible for resolving confrontations between the police and armed offenders as peacefully as possible. He has received a Royal Humane Society Award for bravery.

An avid motorcyclist, Chris has more than 30 accident-free years of riding to his credit. He and his wife Chrissie enjoy their many opportunities to tour in their “motorcycling paradise” nearly as much as they enjoy sharing New Zealand with visiting riders. 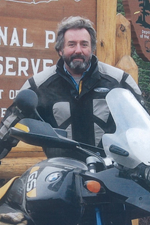 Ed McClure has lived in Fairbanks, Alaska since 1980. He spent his early years riding enduro bikes, and hiking and climbing in Mt. Rainier National Park. He has always enjoyed exploring and ‘going to the end of the road’.

Ed has 30 years experience traveling in Alaska by truck, airplane and motorcycle. He has driven on the Cassiar and Alaska Highway over a dozen times, and is currently training on the Dalton Highway to qualify as an ‘Ice Road Trucker’.

He’s traveled extensively throughout Alaska by motorcycle, including multiple rides north of the Arctic Circle including one of the world’s most challenging motorcycling destinations – Prudhoe Bay. He is intimately familiar with motorcycling throughout Alaska and Canada’s Yukon Territory. The same pioneering spirit that led Ed to answer the call of the wild and head to Alaska at age 21, inspired him and his wife Pat to open a seasonal gift shop in Denali National Park featuring Pat’s original artwork and fabrics, and to build their own cabin in the woods with an authentic outhouse and a resident moose named ‘Molly’. 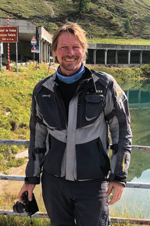 Axel Papst was born in Cologne, Germany and has been riding motorcycles for more than 30 years. He lives in Innsbruck, Austria and has also lived in Canada.

Axel is a qualified Safety Instructor with the Austrian Automobile Association. He has studied Tourism Management, and holds a Bachelor of Arts degree in business. His hobbies include skiing, mountain biking, motorcycles and travel. He is fluent in English and German. 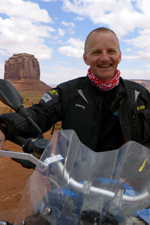 Janis has traveled through most European countries, as well as Asia, North America and South America. He lives with his wife Aija (a professional film director and photographer) and his two daughters on the banks of the Salaca River. The Salaca is famous for salmon fishing and provides opportunities for ice skating as well as fishing – two of Janis’s favorite pastimes. Even better, his favorite enduro trails begin at his terrace. 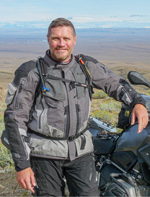 Jason lives in Pretoria, South Africa with his wife Mynette.

Prior to joining Ayres Adventures, and after his military service, Jason pursued a career as an attorney. Eventually, his love for motorcycles, touring and adventure overshadowed his love for the law.

Jason started doing motorcycle and other types of tours through the southern part of Africa on a regular basis in 2007, pursuing his dream of arranging travel for others. In this new venture he assisted with the planning of routes for the annual BMW Eco Challenge, the Annual Bikers for Mandela Day, and the Annual Cancervive rides, which he led as Road Captain.

Having travelled the African continent extensively, either by a motorbike or 4×4 vehicle, Jason describes himself as a true all weather biker, adventurer, nature lover and conversationalist.