What a privilege to visit the Mountain Gorillas of East Africa!

These magnificent primates are on the list of critically endangered animals, with now fewer than 800 in the wild. The vast majority are clustered on the slopes of a few extinct volcanoes, in East Africa, in National Parks in adjoining NW Rwanda, SW Uganda, and far eastern Democratic Republic of Congo. This is located to the west of Lake Victoria, near the equator. A remote location, to say the least. The gorillas live at an elevation of 7000 to 14,000 feet, the lower elevations at the upper limits of human habitation. 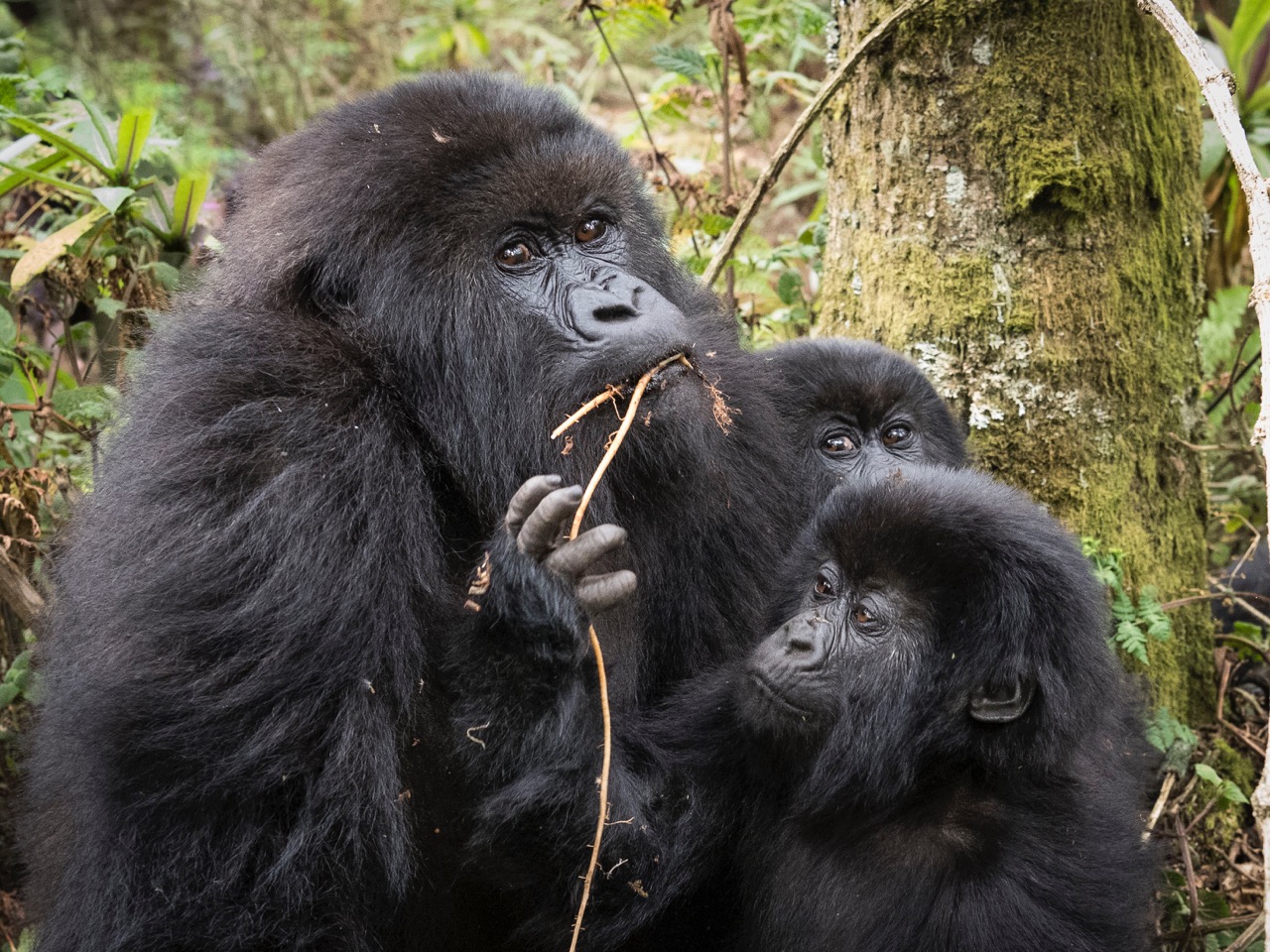 Most of the mountain gorillas, about 500, live in Rwanda. We were told there are 18 groups in Volcanoes National Park in Rwanda, the groups we visited. Each group has on average about 15-20 individuals. Before 2001, there were no organized treks to visit them. Since then, the rangers at Volcanoes NP have been leading 10 groups of 8 humans a day to visit 10 of the 18 groups (they do not allow the other 8 groups to be visited as they are under active research). The treks run most every day of the year. So, let’s say there are around 80 people a day visiting the gorillas here. That’s about 25,000 a year. That’s crazy low numbers, about the same number that go to Antarctica a year! So, like I said, it was an amazing privilege. It’s a bear getting to Rwanda to visit these guys, so this is likely a once in a lifetime opportunity. 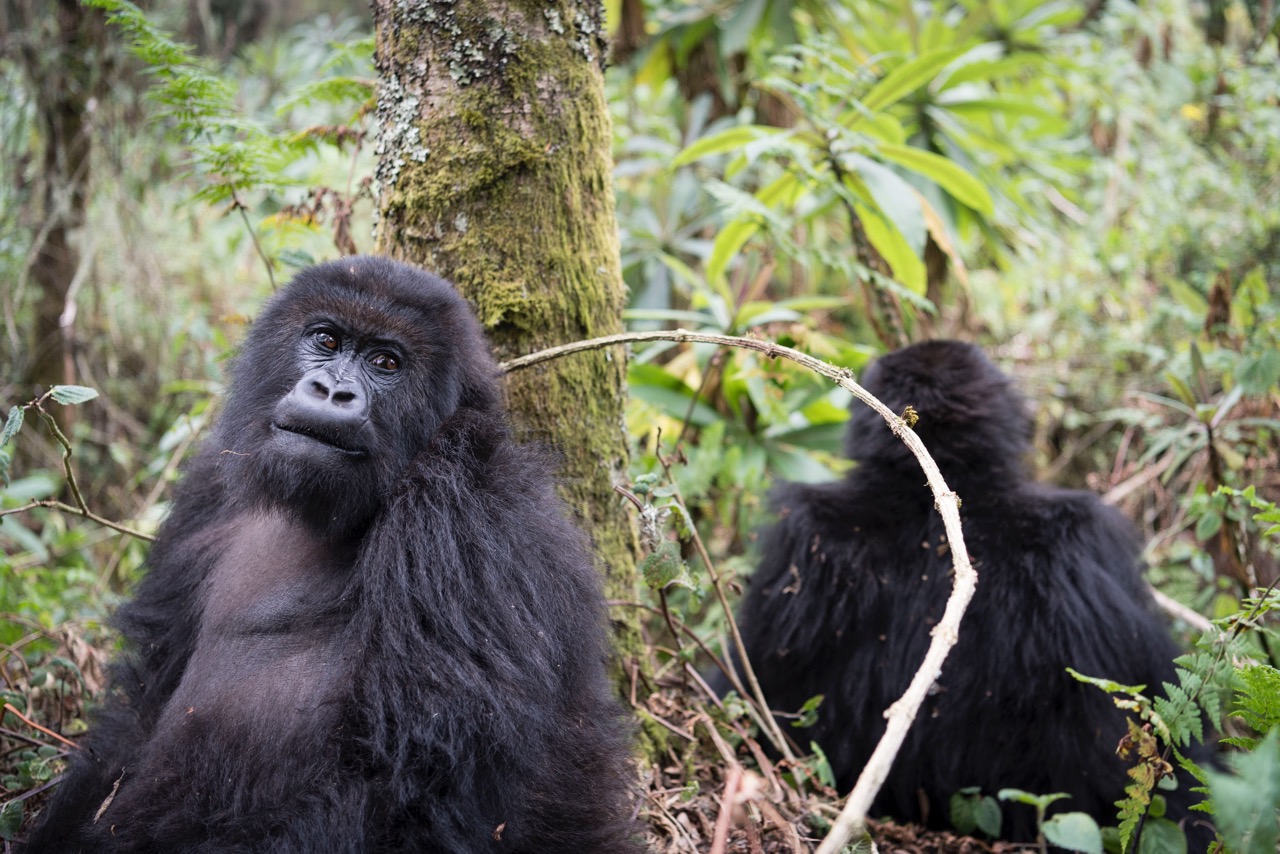 More math: it costs a whopping $750 USD to visit the gorillas. Wow! So, with 80 people a day visiting, they raise about $60,000 US each day. They use those $, among other things, to hire the poachers to be guides. Yes, the guys who were bushwhacking in the bush early in the am to locate the gorillas before we hiked up the mountain were former poachers. Baby gorillas in particular were popular poaching targets, as they would be sold to zoos or to private individuals. Now the former poachers are paid to track the gorillas so that we can visit them.

It was quite a trek up to see the gorillas on the slope of the volcano. My group started at around 6,000 feet and climbed up to around 9,000 feet, as I recall. Becky and Fromo, who were assigned to the “weenie group,” saw their baby gorillas in a nearby zoo (OK, I’m embellishing).

We were told to keep back 20 feet from the gorillas. You have to be kidding! Most of the gorillas were born after organized tours started so they are well habituated to the presence of humans. In your face! Luckily, John Jesson, the CEO of Ayres Adventures, had warned me to bring the wide angle lens and not just the telephoto! 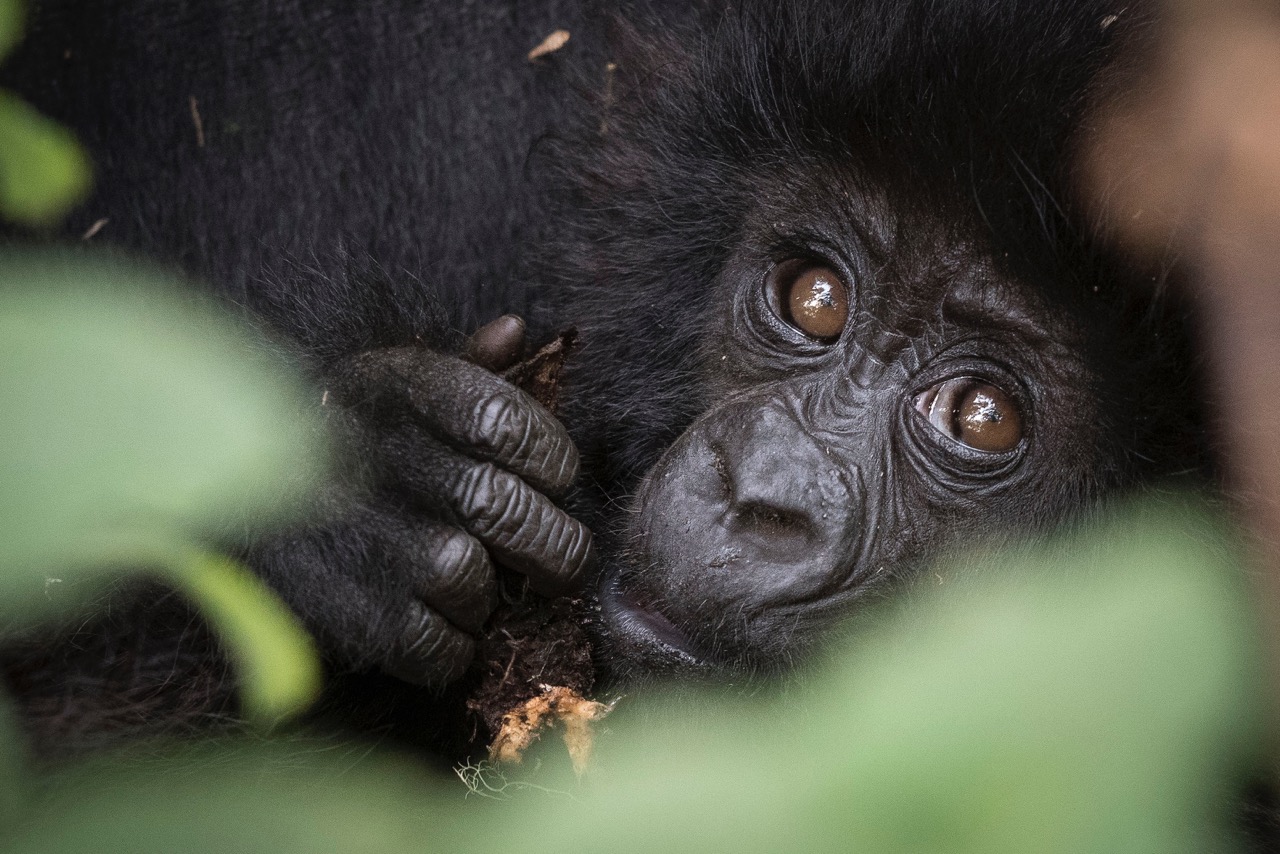 The mom and baby are unique among the mountain gorillas in that the baby is part of a twin pair, very unusual in the gorilla world. Unfortunately, the other baby gorilla died. They think this was because the other baby had some respiratory difficulties, processing dust, as it has been particularly dry recently. Very sad. 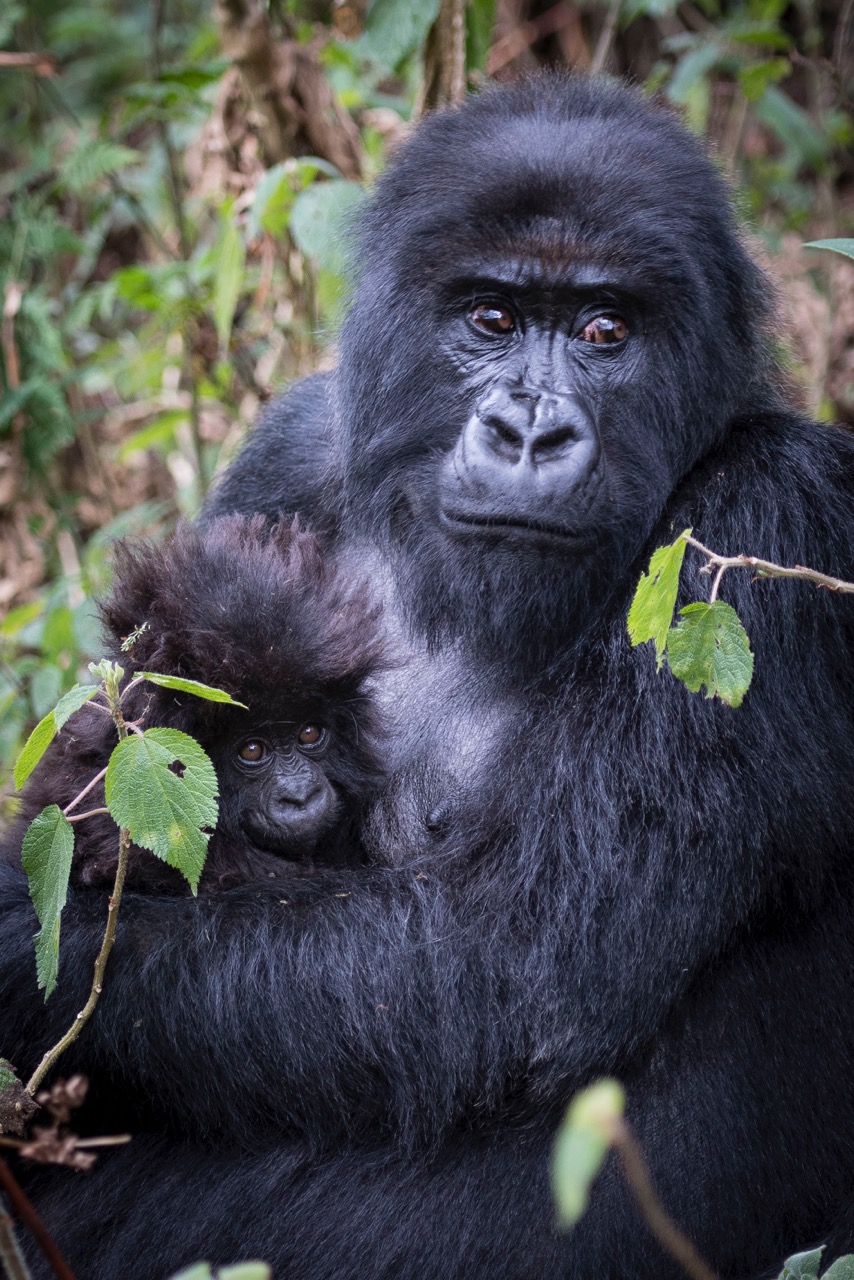 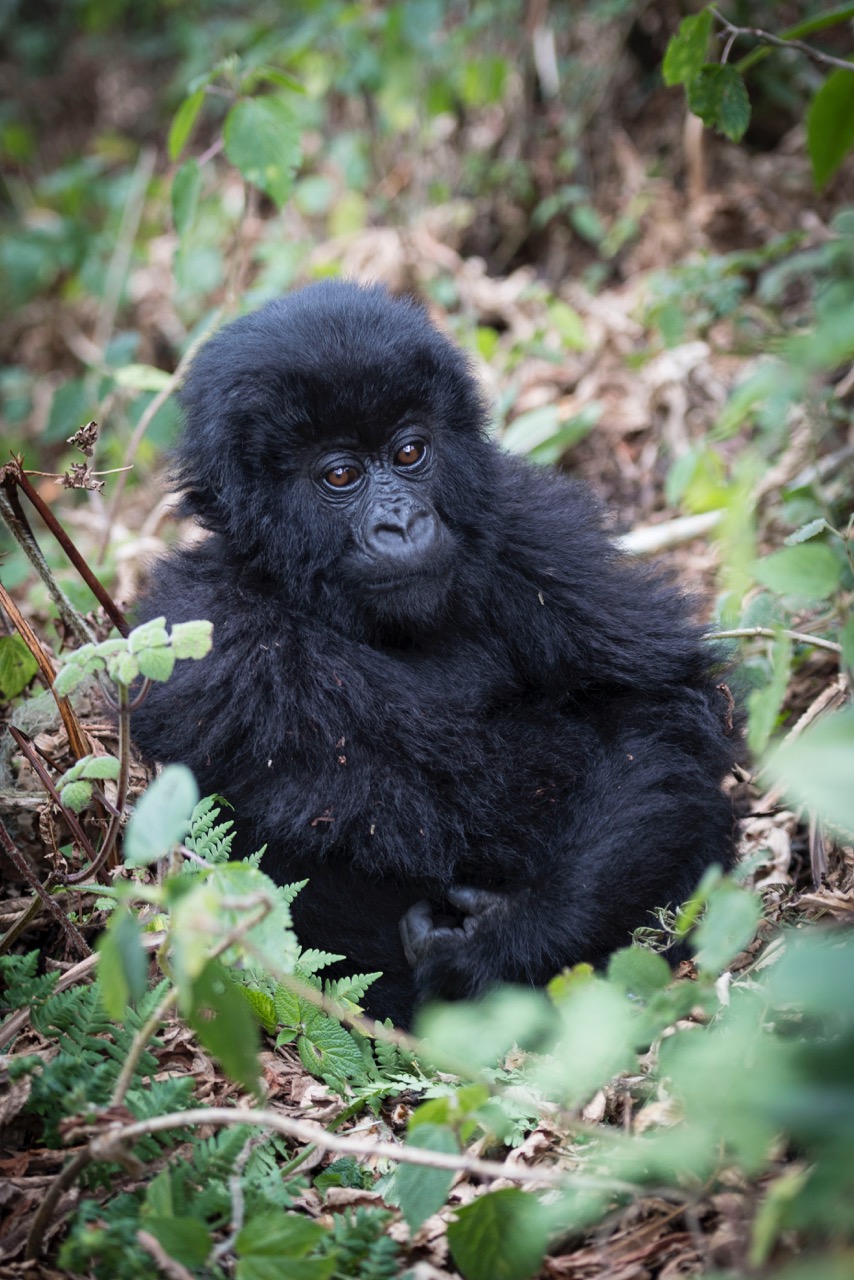 You couldn’t tell it was dry. The jungle floor, once we started bushwhacking to get to the gorillas, was up to 2’ deep with foliage. Crazy stuff. You’d walk along and suddenly break through and be up to your knees deep in vegetation. Luckily the gorillas chose firmer ground on which to be photographed! And we obliged, going all paparazzi on them.

These are the mountain gorillas featured in the book and movie about the American zoologist Dian Fossey, “Gorillas in the Mist,” which detail her adventures studying the mountain gorillas over an 18 year period, ending in 1985, when she was killed in her hut by an attack with a machete. The murder is still unsolved, though the major speculation is that she ran afoul of poachers (Jane Goodall, with whom Dian Fossey is sometimes confused, is British, and spent 55 years studying chimpanzees in nearby Tanzania). 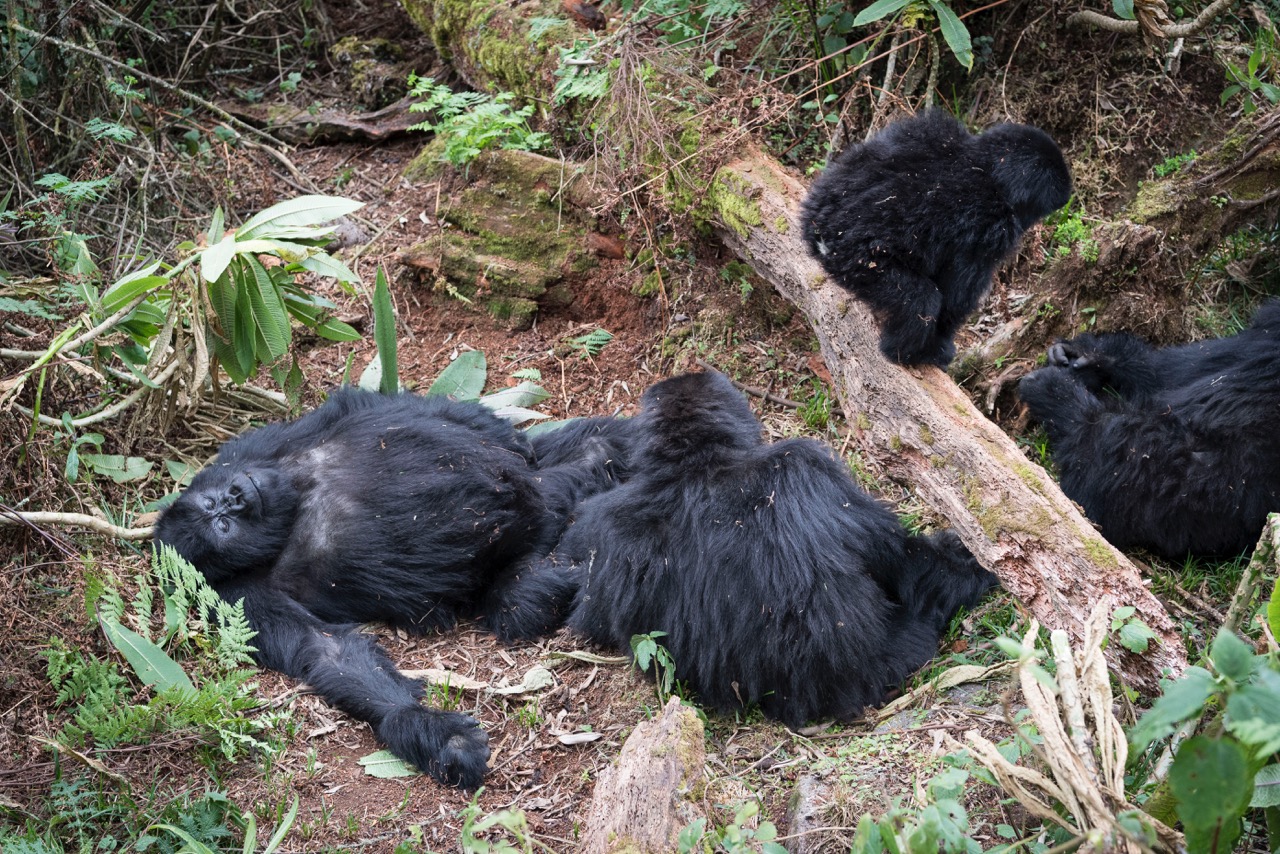 These creatures are truly magnificent. The leader of our group, the elder (he’s about 35) and dominant male (they are called “silverbacks” as their hair grows gray), is shown in the last picture, “holding court” so to speak. The adult males can weigh up to 400 lbs! Our silverback is a big boy, though Becky claimed her silverback was larger. Well, I won’t go there! Luckily, these bad boys are herbivores. 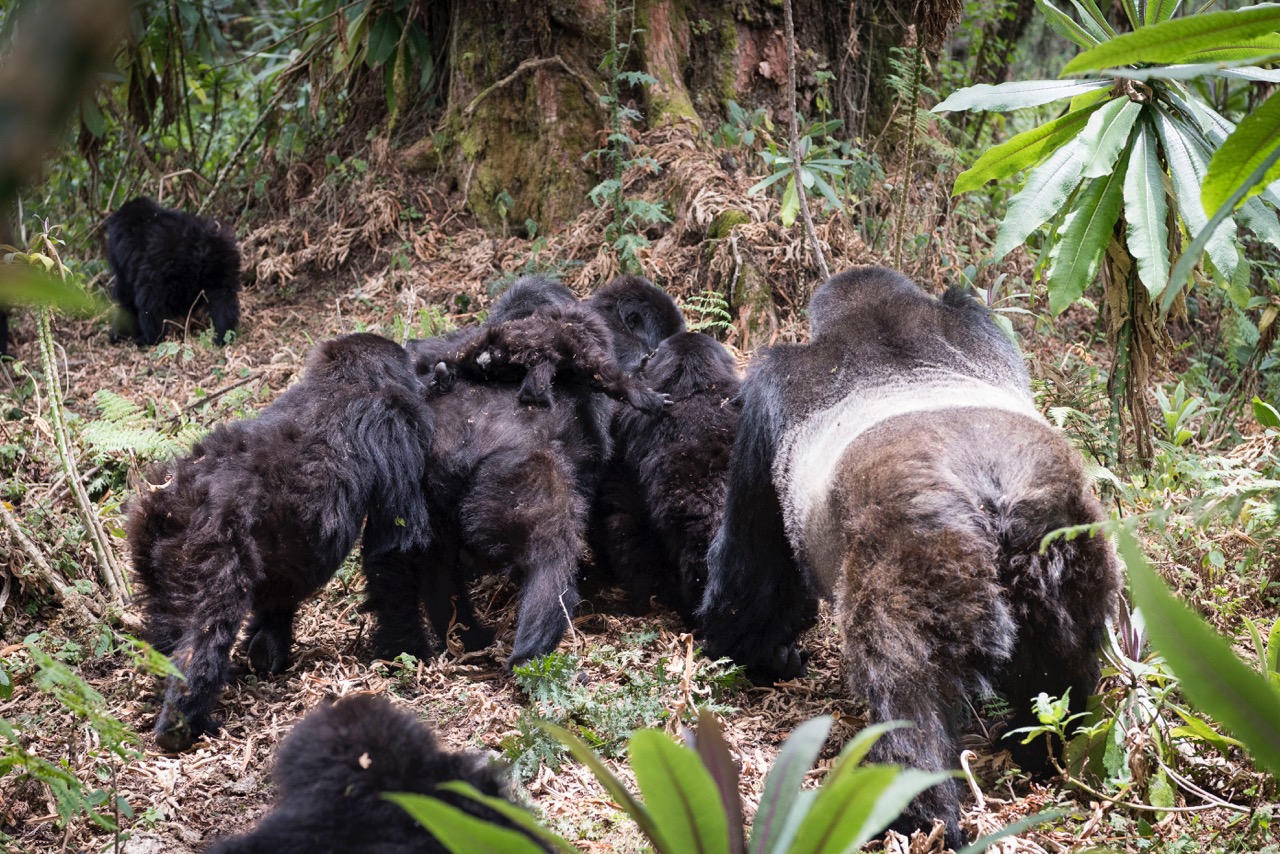 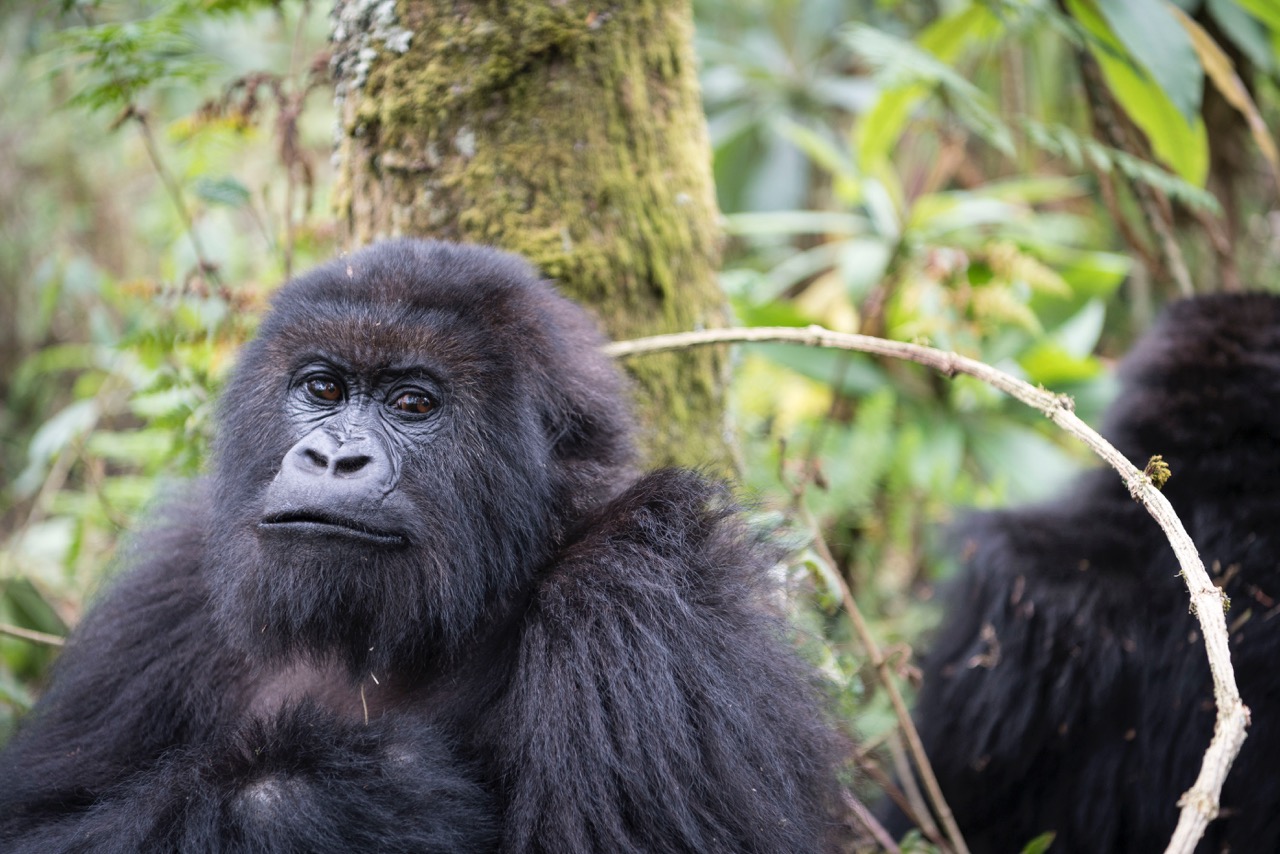 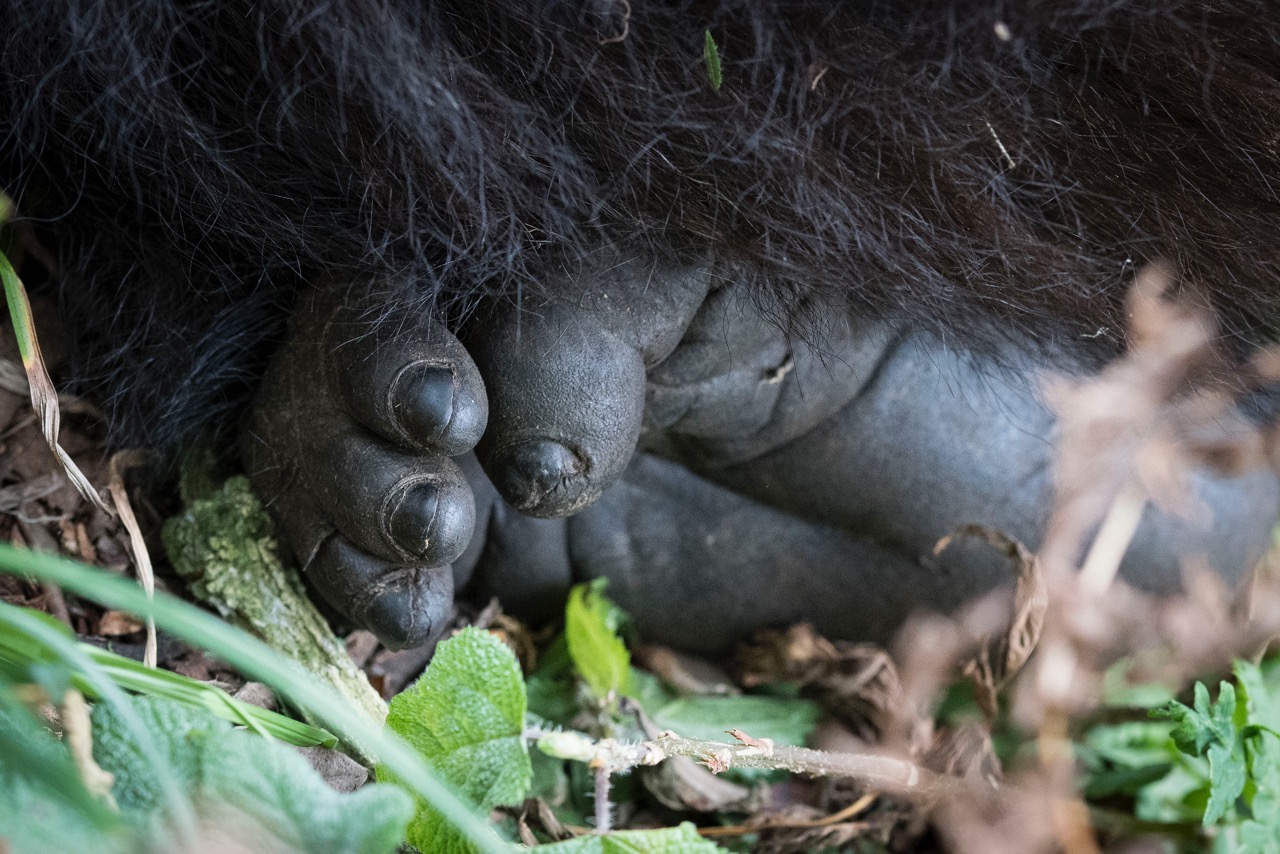 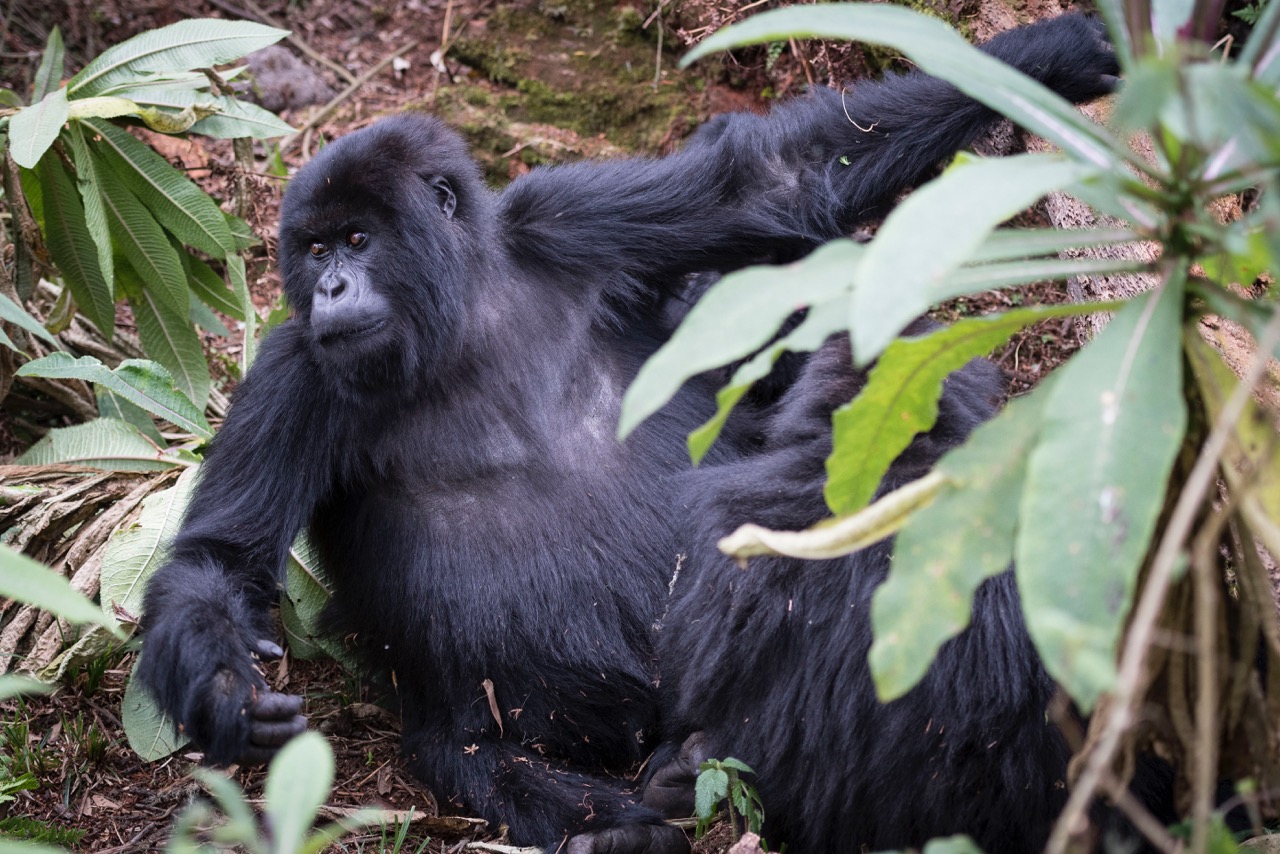 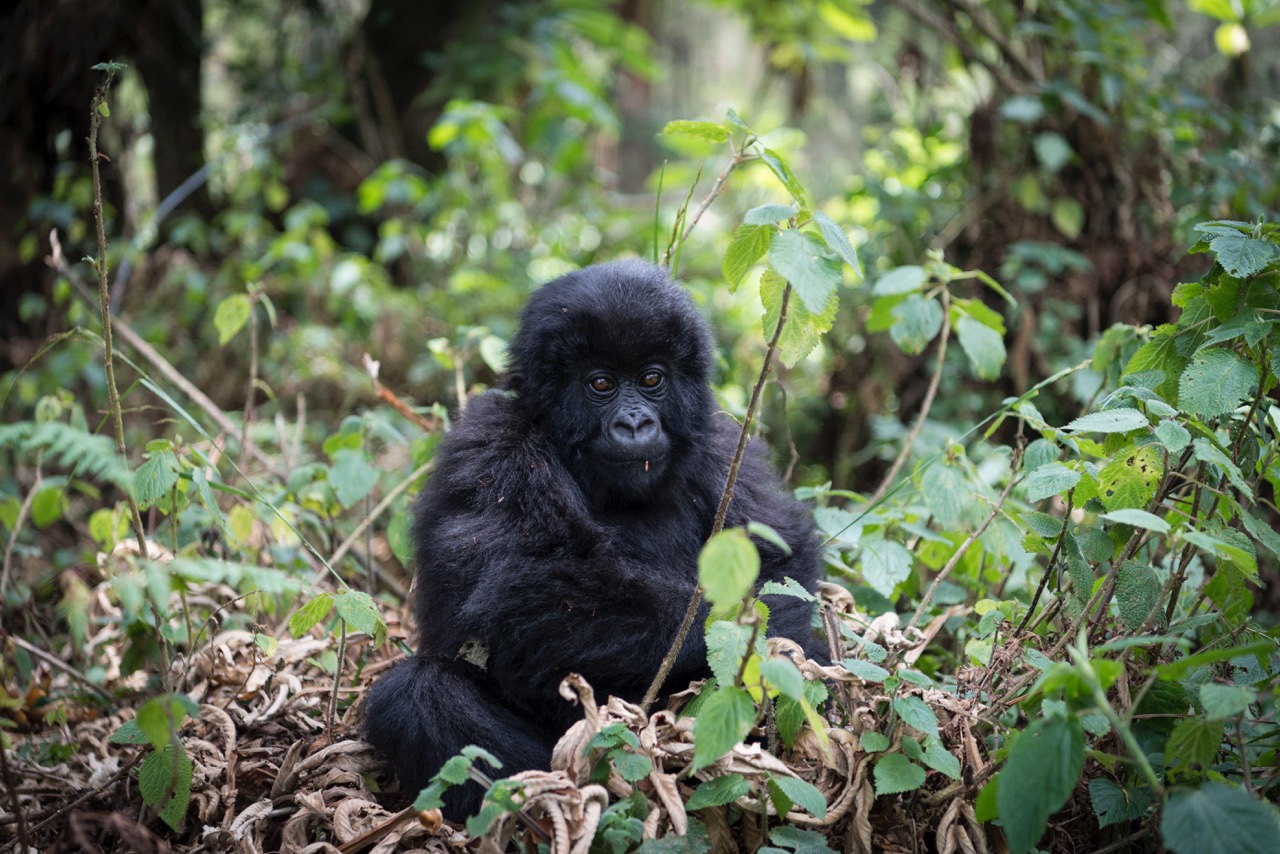 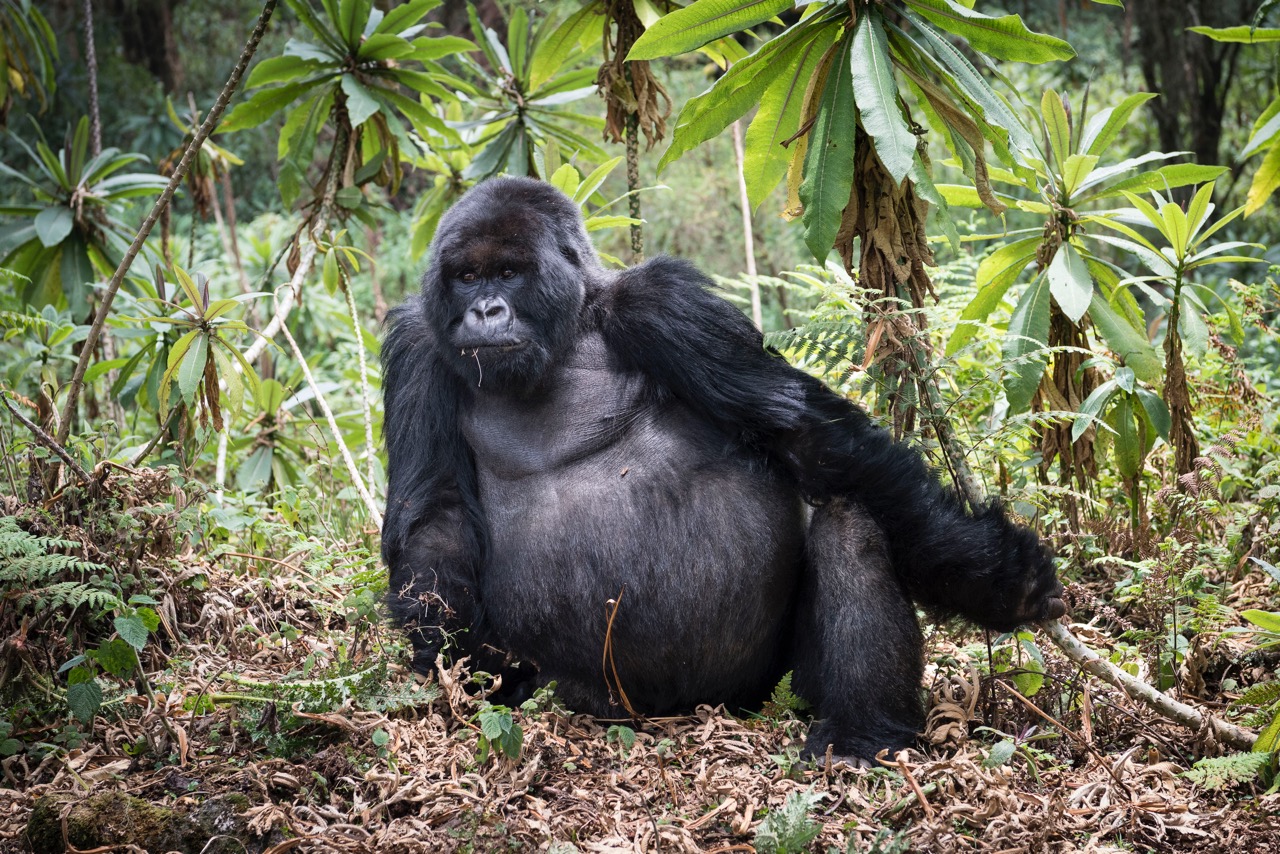